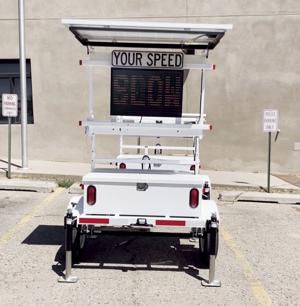 The City of Las Vegas announced Tuesday that the probation period has ended for the city’s speed enforcement trailers, and that citations would be issued using the devices beginning Friday.

City officials said the speed trailers will be placed in high traffic areas around the city, and automatic license plate readers inside the trailers will be used to issue the citations. The two speed trailers have been placed on Mills Avenue, one near Hot Springs Boulevard, and one closer to Robertson High School, though they can be moved at any time to other high traffic areas.

According to the ordinance passed by the City Council in early 2022, citations issued using the speed trailers are $100 per offense, with no exceptions. All citations will be reviewed by police officers before being sent to the violator, as well as to the court for a date to be set. The money collected will go toward the city’s general fund. As with traditional speeding tickets, whether or not a citation is issued will be at the discretion of the officer. The date, time, location and speed of the offense will be noted on each citation.

The trailers arrived in early June 2022, and officers have been taking data from the machines to determine how prevalent speeding is inside the city limits. According to a presentation given by the police department last summer, it was found that over half of all drivers were speeding when they were detected by the trailers.

The trailers are part of the city’s “Slow Your Roll” campaign, intended to get drivers to slow down throughout Las Vegas, a point of emphasis since Mayor Louie Trujillo took office in April 2020.

When citations are issued, they will go to the owner of the vehicle, with a few exceptions:

•The vehicle was stolen or was being driven without the owner’s knowledge at the time of the incident.

Ownership of the vehicle had been lawfully transferred prior to the incident.

•The evidence does not show that a violation was committed.

•The owner was not driving, and can identify the rightful guilty party, who will then be liable.

•The citation was not mailed to the correct address, as noted by New Mexico Motor Vehicle Department records.

The use of automated speed devices has been debated for several years in the United States. Though some experts believe the devices are an effective way of neutrally handing out speeding citations, reducing accidents and keeping speeds down, other experts believe the most harmful speeders are unlikely to be deterred by a device, which could still lead to issues.

The devices have been banned in 18 states and 36 cities across the United States to date, though they have proved to be a massive success in some places. Washington DC, for example, issued nearly 600,000 citations using the devices in 2013, compared to just over 80,000 tickets issued by police officers during the same time period.