Elk Grove Village Mayor Craig Johnson presented two awards for life-saving efforts by Elk Grove Village first responders at Tuesday’s village board meeting: a lifesaver award to a police officer and a unit performance award to a group of firefighters.

Police officer John Williams was awarded his fourth lifesaver award in his 25-year career with the Elk Grove force by Johnson and Police Chief Chuck Walsh.

Walsh said in October, Williams found an unresponsive man in his car in the 2000 block of Pratt Avenue who had stopped breathing with no heartbeat. Williams administered CPR and used an automated external defibrillator (AED) to keep the man alive until paramedics arrived.

Williams thanked Walsh and the fire department personnel for providing the training which allowed him to save that life.

Johnson said Williams used AEDs in 2013 and 2020 to save the lives of two others whose hearts had stopped and in 2019 administered Narcan to a person suffering an opioid overdose. Johnson said that person then entered the Elk Grove Village Cares program for addiction treatment. 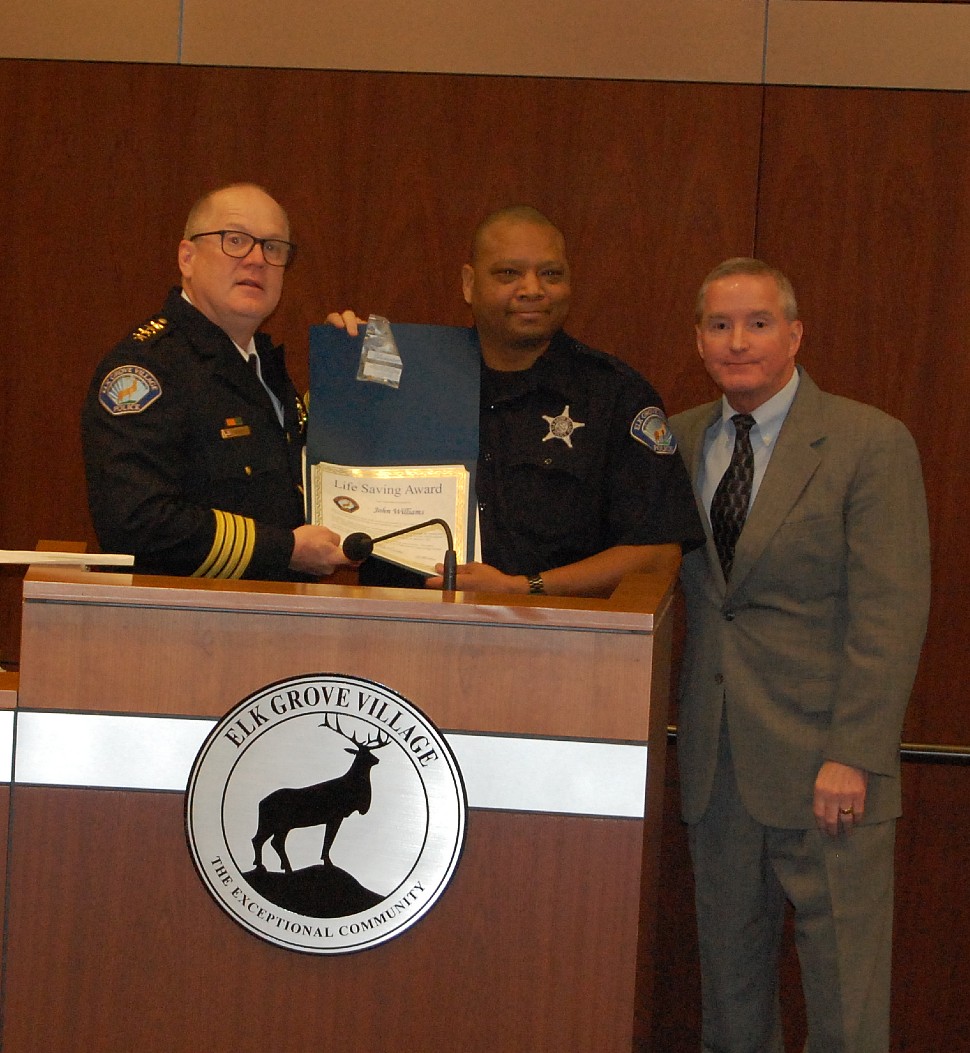 Crews from Elk Grove Village Fire Engine 10, Ambulance 10, and Quint 7 were also honored with a unit performance citation for their efforts in saving a bed-bound man from a house fire.

The fire occurred at about 7:30 p.m. Sunday, Oct. 3, on Hodlmair Court, near Nerge and Meacham roads.

The wife of the man was cooking on a stovetop when she was called to tend to her husband elsewhere in the house. In October, Fire Chief Richard Mikel told the Journal, while the woman was tending to her husband, what was cooking on the stove sparked a kitchen fire, igniting cabinets near the stove.

Tuesday, Mikel said the home’s layout had the kitchen in the front of the home near the front door and the bedrooms toward the rear of the first floor, meaning responding firefighters had to push past the burning kitchen to search for the man with low visibility and moderate heat before bringing him out past the kitchen where other firefighters were battling the blaze. The husband was transported to Alexian Brothers Medical Center for treatment of possible smoke inhalation.

At Tuesday’s meeting, Johnson asked the scene commander, Engine 10 Lt. Joe McEnery, what his first thoughts were assessing the scene as firefighters arrived.

McEnery said, “I knew our crew was the best, I was confident we could do it,” and said, “I was surprised how well it went.” He also praised the man’s wife for having the presence of mind to close doors to contain and minimize the spread of the fire.

Johnson said these types of fires are rare in the village, but said firefighters are constantly training so they are able to perform when those incidents do occur.

Support local news by subscribing to the Journal & Topics in print or online.