How to make jet fuel from sunlight, air and water vapor 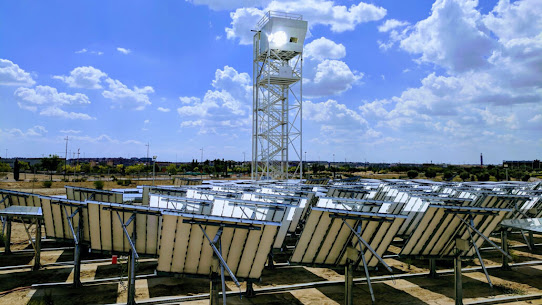 An array of 169 reflectors focus sunlight on a solar reactor at the top of this tower. The light reacts with carbon dioxide and water vapor, forming a mixture that can be turned into kerosene and diesel fuel.

Jet fuel can now be siphoned from the air.

Or at least that’s the case in Móstoles, Spain, where researchers demonstrated that an outdoor system could produce kerosene, used as jet fuel, with three simple ingredients: sunlight, carbon dioxide and water vapor. Solar kerosene could replace petroleum-derived jet fuel in aviation and help stabilize greenhouse gas emissions, the researchers report in the July 20 Joule.

Burning solar-derived kerosene releases carbon dioxide, but only as much as is used to make it, says Aldo Steinfeld, an engineer at ETH Zurich. “That makes the fuel carbon neutral, especially if we use carbon dioxide captured directly from the air.”

Kerosene is the fuel of choice for aviation, a sector responsible for around 5 percent of human-caused greenhouse gas emissions. Finding sustainable alternatives has proven difficult, especially for long-distance aviation, because kerosene is packed with so much energy, says chemical physicist Ellen Stechel of Arizona State University in Tempe who was not involved in the study.

In 2015, Steinfeld and his colleagues synthesized solar kerosene in the laboratory, but no one had produced the fuel entirely in a single system in the field. So Steinfeld and his team positioned 169 sun-tracking mirrors to reflect and focus radiation equivalent to about 2,500 suns into a solar reactor atop a 15-meter-tall tower. The reactor has a window to let the light in, ports that supply carbon dioxide and water vapor as well as a material used to catalyze chemical reactions called porous ceria. 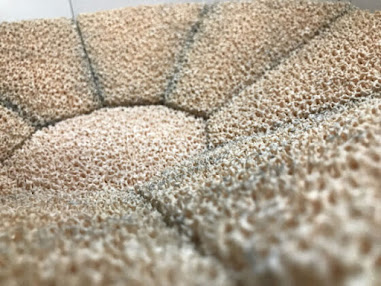 Within the solar reactor, porous ceria (shown) gets heated by sunlight and reacts with carbon dioxide and water vapor to produce syngas, a mixture of hydrogen gas and carbon monoxide.ETH ZURICH

When heated with solar radiation, the ceria reacts with carbon dioxide and water vapor in the reactor to produce syngas — a mixture of hydrogen gas and carbon monoxide. The syngas is then piped to the tower’s base where a machine converts it into kerosene and other hydrocarbons.

Over nine days of operation, the researchers found that the tower converted about 4 percent of the used solar energy into roughly 5,191 liters of syngas, which was used to synthesize both kerosene and diesel. This proof-of-principle setup produced about a liter of kerosene a day, Steinfeld says.

“It’s a major milestone,” Stechel says, though the efficiency needs to be improved for the technology to be useful to industry. For context, a Boeing 747 passenger jet burns around 19,000 liters of fuel during takeoff and the ascent to cruising altitude. Recovering heat unused by the system and improving the ceria’s heat absorption could boost the tower’s efficiency to more than 20 percent, making it economically practical, the researchers say.

Questions or comments on this article? E-mail us at feedback@sciencenews.org