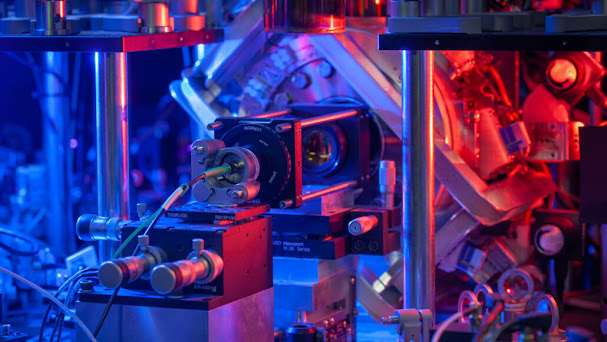 Quantum entanglement, a type of ethereal link between particles, improves the security of quantum communication, as demonstrated in three experiments (the one pictured, by researchers in France, Switzerland and England, used strontium ions in its test).

Stealthy
communication just got more secure, thanks to quantum entanglement.

Quantum
physics provides a way to share secret information that’s mathematically proven
to be safe from the prying eyes of spies. But until now, demonstrations of the
technique, called quantum key distribution, rested on an assumption: The
devices used to create and measure quantum particles have to be known to be
flawless. Hidden defects could allow a stealthy snoop to penetrate the security
unnoticed.

Now,
three teams of researchers have demonstrated the ability to perform secure
quantum communication without prior confirmation that the devices are
foolproof. Called device-independent quantum key distribution, the method is
based on quantum entanglement, a mysterious relationship between particles that
links their properties even when separated over long distances.

In everyday
communication, such as the transmission of credit card numbers over the
internet, a secret code, or key, is used to garble the information, so that it
can be read only by someone else with the key. But there’s a quandary: How can
a distant sender and receiver share that key with one another while ensuring
that no one else has intercepted it along the way?

Quantum
physics provides a way to share keys by transmitting a series of quantum
particles, such as particles of light called photons, and performing
measurements on them. By comparing notes, the users can be sure that no one
else has intercepted the key. Those secret keys, once
established, can then be used to encrypt the sensitive intel (SN:
12/13/17). By comparison, standard internet security rests on a
relatively shaky foundation of math problems that are difficult for today’s
computers to solve, which could be vulnerable to new technology, namely quantum computers (SN:
6/29/17).

But
quantum communication typically has a catch. “There cannot be any glitch that
is unforeseen,” says quantum physicist Valerio Scarani of the National
University of Singapore. For example, he says, imagine that your device is
supposed to emit one photon but unknown to you, it emits two photons. Any such
flaws would mean that the mathematical proof of security no longer holds up. A
hacker could sniff out your secret key, even though the transmission seems
secure.

Device-independent
quantum key distribution can rule out such flaws. The method builds off of a
quantum technique known as a Bell test, which involves measurements of
entangled particles. Such tests can prove that quantum mechanics really does
have “spooky” properties, namely nonlocality, the idea that measurements of one
particle can be correlated with those of a distant particle. In 2015,
researchers performed the first “loophole-free” Bell tests, which certified beyond a doubt that
quantum physics’ counterintuitive nature is real (SN: 12/15/15).

“The
Bell test basically acts as a guarantee,” says Jean-Daniel Bancal of CEA Saclay
in France. A faulty device would fail the test, so “we can infer that the
device is working properly.”

In
their study, Bancal and colleagues used entangled, electrically charged
strontium atoms separated by about two meters. Measurements of those ions
certified that their devices were behaving properly, and the researchers generated a secret key, the team reports in the July 28 Nature.

Typically,
quantum communication is meant for long-distance dispatches. (To share a secret
with someone two meters away, it would be easier to simply walk across the
room.) So Scarani and colleagues studied entangled rubidium atoms 400 meters
apart. The setup had what it took to produce a secret key, the
researchers report in the same issue of Nature. But the team didn’t follow the process all the way through:
The extra distance meant that producing a key would have taken months.

In
the third study, published in the July 29 Physical Review Letters, researchers wrangled entangled photons rather
than atoms or ions. Physicist Wen-Zhao Liu of the University of Science and
Technology of China in Hefei and colleagues also demonstrated the capability to
generate keys, at distances up to 220 meters. This is particularly challenging
to do with photons, Liu says, because photons are often lost in the process of
transmission and detection.

Loophole-free
Bell tests are already no easy feat, and these techniques are even more
challenging, says physicist Krister Shalm of the National Institute of
Standards and Technology in Boulder, Colo. “The requirements for this
experiment are so absurdly high that it’s just an impressive achievement to be
able to demonstrate some of these capabilities,” says Shalm, who wrote a perspective in the same issue of Nature.

That
means that the technique won’t see practical use anytime soon, says physicist
Nicolas Gisin of the University of Geneva, who was not involved with the
research.

Still, device-independent
quantum key distribution is “a totally fascinating idea,” Gisin says. Bell tests
were designed to answer a philosophical question about the nature of reality —
whether quantum physics really is as weird as it seems. “To see that this now
becomes a tool that enables something else,” he says, “this is the beauty.”

Questions or comments on this article? E-mail us at feedback@sciencenews.org