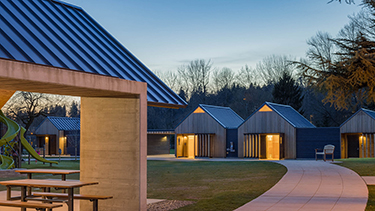 
A total of 13 projects were recognized. Two received Honor Awards, the top prize; four were recognized with a Merit Award; three got citation Awards; and four received an Honorable Mention.


Mahlum Architects’ Alma Clark Glass Hall and EHDD Architecture’s Juanita Beach Park Bathhouse took home the top awards of the evening. The 117,340-square-foot Alma Clark Glass Hall is an inclusive residential community at Western Washington University. The multistate jury praised the project “for its solution to a challenging site, its beautiful, warm timber interiors and simple exterior as well as its commitment to accessibility, diversity, equity, inclusion and sustainability.” 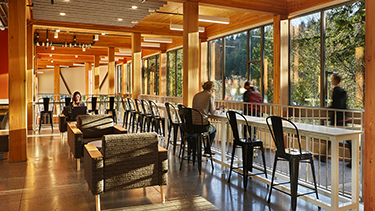 
The much smaller 4,870-square-foot Juanita Beach Park Bathhouse also utilizes warm wood and simple materials to bring new life to the busiest waterfront park in the Kirkland Parks and Community Services park system. Juror Janet Tam noted how the project had a “beautiful-wonderful use of materials particularly CLT, creating space between structures and iconic shapes and forms.”


The bathhouse project, developed by Kirkland Parks and Community Services, replaced an existing building constructed in 1960. The design-team looked to the site’s rich logging and shingle mill history to inspire and inform the building and pavilions. Tam continued, “(The) rhythm of the repetitive forms is very simple but artistic and human scaled; seems to really have responded to the community and users.”


The other winners were:


The awards were the first in-person civil awards program to be held since 2019 and were combined with the Northwest and Pacific AIA Honors and Awards Program.